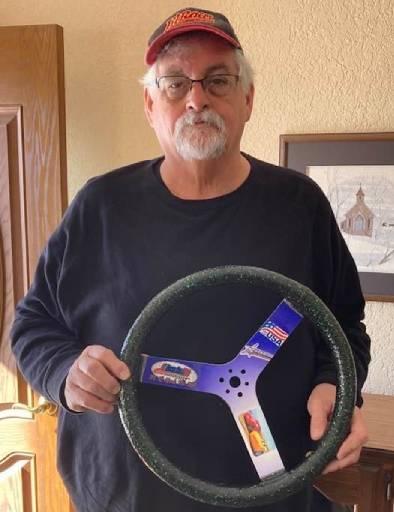 WIN this custom made steering wheel for your racecar or as a conversation piece for your home or man cave! Chances are 3.00 each or 2 for 5.00. Drawing will be held the first Sunday in June. Retail price is 320.00Chuck a Duck Virtually by purchasing your chances for these 4 Lost Island Day Passes at the Bullring Lil Racer Car Club! Chances are only 1.

LIL RACER CAR CLUB - April 28th, 2022 12:52 pm
The Benton County Speedway Bullring Lil Racer Car Club is excited to be back in its clubhouse this Sunday and is looking forward to another fun year with all the Lil Racers. Club registration this year begins on Sunday and will run for a couple of weeks.  When kids register, they will receive a new club permit, lanyard and badge holder for the season.
advertiser content

SAGE HOLMES, VT SPORTSWRITER - April 26th, 2022 6:51 pm
﻿Vikette soccer defeats Raiders 5-0VINTON – The Vinton-Shellsburg Vikette soccer teams honored its seniors with a 5-0 victory over the Williamsburg Raiders on the Karr Athletic Complex pitch on April 25. The Vikettes took a quick 3-0 lead with goals by Ashlie Meyer, Abby Davis and Grace Sutton.The Vikettes will travel to Tama on April 29 to take on the South Tama Trojans, then to Dyersville on May 3 to take on the Beckman Catholic Blazers, then Alburnett as part of a girls'/boys' doubleheader, with no junior varsity, on May 5 against the Cedar Valley Christian Huskies, and then the Vinton-Shellsburg Girls/Boys home tournament, then to Fross Park in Center Point to take on the Center Point-Urbana Stormin' Pointers on May 10 and then to Spartan Stadium in Solon to take on the Solon Spartans.

SAGE HOLMES, VT SPORTSWRITER - April 26th, 2022 6:51 pm
﻿Viking soccer loses to Wolves 4-1VINTON – The Vinton-Shellsburg Viking varsity soccer team (5-2) took on the Marion Wolves (6-1) at the Karr Athletic Complex on April 22 and the Wolves defeated the Vikings 4-1, and the the Wolves scored four goals all in a row, but the Vikings broke the shutout in the second half.The Vikings had a 20-game win streak snapped against the Mount Vernon Mustangs at Cornell College 2-1, then lost their second game in a row to the Marion Wolves 4-1.
advertiser content

IMCA - April 25th, 2022 10:24 am
Opening night is taking on a “super” look at Benton County Speedway.After wet weather forced the delay of Sunday’s season opener, IMCA Sunoco Late Models will join the show Sunday, May 1 for the first Super Sunday event of the season at The Bullring.In the first of two appearances for the division this season, Late Models will vie for a $1,000 winner’s share Sunday night.

SAGE HOLMES, VT SPORTSWRITER - April 19th, 2022 9:36 pm
﻿Viking soccer loses first regular-season match since May 15, 2019MOUNT VERNON – First loss since May 15, 2019, when they lost to Benton Community 2-1 at the Karr Athletic Complex, before compiling 20 consecutive wins before losing to the Mount Vernon Mustangs in Mount Vernon, 2-1 on April 19.The game was tied 1-1 until there were five minutes remaining when Mount Vernon scored the winner, to win 2-1.

The Bullring is back in business this Sunday

IMCA - April 19th, 2022 7:19 pm
Opening night of the 2022 season is slated for this Sunday, April 24, at Benton County Speedway.The five weekly classes from last season will be returning this year, along with the addition of the Legends.Direct Legends cars, competing weekly for the first time in history on the Vinton quarter-mile.Friesen Performance IMCA Modifieds presented by 96.

SAGE HOLMES, VT SPORTSWRITER - April 18th, 2022 11:24 am
﻿Vikette soccer earns first-ever win over Clippers 1-0VINTON – #1! The Vinton-Shellsburg Vikette varsity soccer team earned its first ever win over the Clear Creek Amana Clippers 1-0 at the Karr Athletic Complex at the Karr Athletic Complex on April 14, with Vikette senior Charlee Johnson scoring the lone goal of the game.The Vikettes are now 5-1 (2-1 WaMaC West) and will take on the Mount Vernon Mustangs on their home pitch on Tuesday, April 19, before traveling to Thomas Park in Marion to take on the Marion Wolves.
View Page
1234567891011
advertiser content