ROB LEVIS - January 10th, 2022 11:15 am
The Stormin’ Vikes continue to push towards their goal of the most successful season in team history.  Saturday they traveled to Waterloo coming away with a solid second-place finish in the annual Tro-Hawk -Invitational.  Decorah once again proved too deep and talented to overcome, but the team did manage to finish ahead of Spencer, host Waterloo, Newton and Keokuk in duplicating last years’ second-place finish at this meet.

SAGE HOLMES, VT SPORTSWRITER - January 5th, 2022 4:39 pm
﻿Viking basketball loses to Raiders 68-34VINTON – The Vinton-Shellsburg Viking varsity basketball team took the Williamsburg Raiders in Garrison Fieldhouse on Jan. 4 and the Raiders earned a 68-34 win over the Vikings.  The Raiders (8-1, 4-0 WaMaC West) pushed the Vikings to 2-7 (1-2 WaMaC West) with the win. The Vikings will travel the Independence to take on the Independence Mustangs. 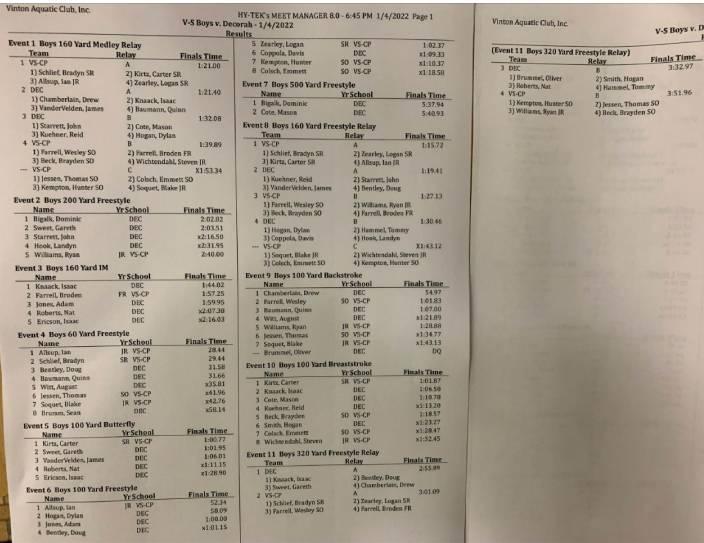 2022 Dan Gable Ms. and Mr. Wrestler of the Year Open for Public Vote

VINTON TODAY - December 31st, 2021 8:30 pm
Fareway Stores, Inc. and IAwrestle present the Dan Gable Ms. and Mr. Wrestler of the Year Awards in coordination with the Iowa Wrestling Coaches and Officials Association (IWCOA).The IWCOA accepted nominations from high school coaches for student athletes in each of the three state wrestling classes for the men and combined all classes for the women’s award, regardless of their year in school and weight class.
View Page
89101112131415161718
advertiser content