Grab & Go and Drive Through Fundraisers are a hit this weekend 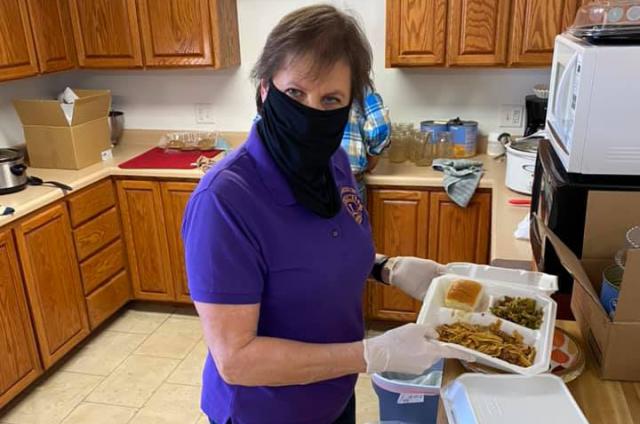 Teresa Meyer prepared the first meal for the beef and noodle supper on Saturday in Garrison.

The Vinton Fire Department held its annual Fish Fry Fundraiser this past Friday with a bit of a twist on the service. The Garrison Lions Club held their annual fundraiser on Saturday with the same twist. Both organizations and several others have followed suit by hold drive through events.

Both a success. For the Vinton Fire Department, the line to pick up meals for a freewill donation extended for more than 8 blocks in one direction and several blocks in another. The flow of cars was steady with a consistent replacing of cars as those in the front of the line received their meals. It was pretty clear that Vinton turned out to support our local department and to show them our appreciation with donations.

Garrison served 119 cars with their fundraiser, while the Vinton Fire Department ran out of food a mere 3 minutes before the end of serving time.

Both groups extended a grateful thank you to their respective communities for the support in both of these events.