Sports : Gustin gets big Late Model payday at the Bullring 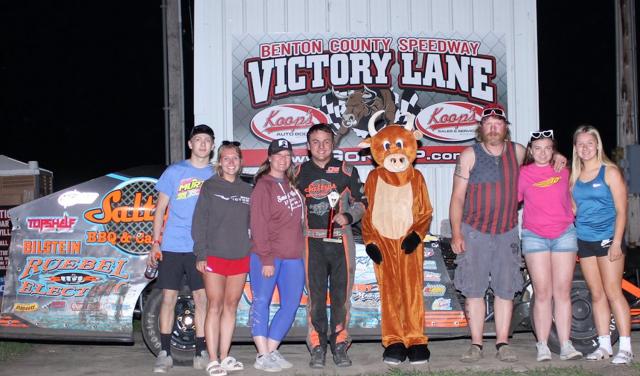 Dylan Thornton ended his weekend the same place he started it, victory lane. (Photo by Jim Wittke)
Richie Gustin has already won a number of high paying IMCA Modified events in his career at Benton County Speedway. Sunday night he added $1,500 and a Late Model win to his Bullring accomplishments. The California native was the IMCA Modified winner at Benton County Speedway on Sunday and at Marshalltown Speedway on Friday. In the first of three appearance for Late Models this season, Gustin made quick work of the 18-car field. From a front row start, he pulled away from fellow front row starter John Emerson.Building a straightaway lead, Gustin left Chad Holladay, Charlie McKenna and Jason Hahne to battle for second after Emerson slid off the top of turn four.Although a couple late cautions bunched the field, Gustin proved to be too strong on each restart and sailed to the win. Jeff Aikey, who started in the fifth row, made a nice run through traffic to steal runner-up honors. Hahne, McKenna and Luke Pestka competed the top five. The division ran SLMR rules at the Sunday special.Dylan Thornton made an impressive run to capture top honors in the KISS Country 96.5 IMCA Modified feature. From an eighth starting spot, Thornton worked into the top five shortly after the green flag waved, then made the move of the night entering turn one a lap later.With a three-wide battle for second in front of him, Thornton found just enough daylight to make it four-abreast entering the first corner. By the time he entered turn two, he held the runner-up spot and set his sights on race leader Jerry Dedrick.Thornton worked the top side around Dedrick and sailed to a five-and-a-half-second lead before a pair of late cautions slowed action. Thornton then held off Derrick Stewart and Troy Cordes to earn his first win on the quarter-mile. Dedrick and Jason Briese completed the top five.Tony Olson earned his first Bullring win of the season in the 15-lapper for Karl Kustoms Northern SportMods presented by Christie Door Company. It was pole-sitter Joe Docekal who took the early lead while Kalen Lopez tried to keep pace with the front-runner. Following a mid-race caution, however, everything changed out front.On the restart, Docekal slipped off the top of turn four to bring out another caution, leaving Lopez on the pole and Olson, who started ninth, to his outside for the ensuing restart. When racing resumed, Olson ran the top side to victory ahead of a hard-charging Logan Anderson. Dylan VanWyk, who started alongside Anderson in the sixth row, finished third. Brian Kauffman raced from 10th to finish fourth and Ryan King made an impressive run from row eight to round out the top five.Even in his dad's car, Dallon Murty seems unbeatable in the IMCA Sunoco Stock Cars presented by Albert Auto. After suffering damage to his own ride earlier in the weekend, Murty drove his father Damon's #99D to victory Sunday night.After starting in the third row, Murty quickly raced through traffic to secure the lead early. He then drove away to score his second straight win in weekly action at the Bullring. Jay Schmidt ran second ahead of Jason Doyle, Leah Wroten and Miciah Hidlebaugh.Nathan Ballard scored his first win of the season in the 15-lap feature for IMCA Sunoco Hobby Stocks presented by Kwik Star. Ballard came from a third row start and assumed command on the first of 15 laps. He took the checkers comfortably ahead of Erick Knutson. Jacob Floyd, Joren Fisher and Braden Richards rounded out the top five.Chuck Fullenkamp was declared the winner in the Mach-1 IMCA Sport Compacts presented by Auto Crafters after Nathan Chandler failed post-race inspection. Completing the top five were Logan Clausen, Travis Losenicky, Zeke Wheeler and William Michel.Racing resumes in all five weekly divisions next Sunday, May 9, with Micro Sprints also on the schedule. The Lil' Racer Car Club will have prize giveaways for Mother's Day.Check out the latest speedway information at BCSBullring.com or @BCSBullring on Facebook.