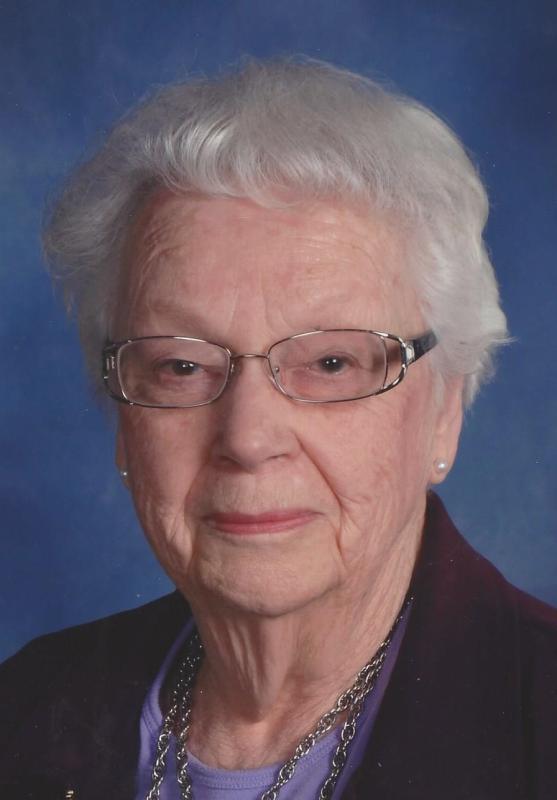 Services will be held at 10:00 a.m. Monday, June 20, 2022 at Van Steenhuyse-Teahen Funeral Home in Vinton. Burial will be in Evergreen Cemetery, Vinton.

Marion May Waldorf was born August 28, 1925 in Estherville to Horace and Florence (Cable) Waldorf. In 1930, the family moved to Vinton where they purchased the Palace Theater.

Marion graduated from Lincoln High School in 1943 and attended AIB in Des Moines. She was employed by the Tobin Law Firm until she married Charles Marion Isbell in 1945.

When her children were all in school, Marion worked with her husband in their Fourth Street Cleaners. After their business was sold, she worked as assistant manager of Harold Rector's Ben Franklin Store until her retirement.

Marion was a lifetime member of the Vinton Presbyterian Church where she taught Sunday school, served as Deacon and Elder and was active in the women's work. She was a Den Mother in Cub and Brownie Scouts, Navy Mother, volunteer clerking elections and a Virginia Gay Hospital Annex advocate.

Marion was preceded in death by her husband of 64 years, Marion; sons: Mike, Steve and Jim Isbell; brothers and their wives: Cable (Harleen) and Neil (Kathy) Waldorf; sister and brother-in-law, Rachael (Henry) Raish; and other family members.

Online condolences may be left at www.teahenfuneralhome.com.

DB May 20, 2022, 9:51 pm Sending sympathy to all of Marion’s family. She was a great lady.
JB May 21, 2022, 7:46 am My deepest sympathies to you all. I am so very blessed I had the honor of caring for your dear mom while living at Assisted Living. She was such a sweet, loving, talented lady, who adored her family, always enjoyed showing her photos with me and sharing the stories of her growing up and raising her family, which she was VERY PROUD of. Sending prayers and hugs to you all ❤️
J&MB May 21, 2022, 10:13 am Our deepest sympathy. She had such a caring way- a great friend to our family.
RB May 23, 2022, 12:55 pm No nicer lady to be had. Such a joy, always ready with a smile even on those not so good days when something went awry at the cleaners. I so enjoyed her and Marion! My ❤️ felt sympathies to all your family and to her friends who will miss her much
TS May 28, 2022, 12:47 am Your mom was a really neat lady. The house on 1st was were I had my first vanilla,milk,and sugar with bob after school.your all in my thoughts.RIP
advertiser content