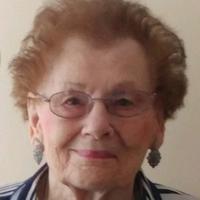 Mary Ann Thorman, 100, Blairstown, Iowa, passed away dearly loved by her family on May 16, 2022 at Virginia Gay Nursing & Rehab in Vinton, Iowa after an extended illness.

Services will be held at St. John's Catholic Church in Blairstown, Iowa at 10:30 a.m. Saturday, May 21, 2022 with Rev. Craig Steimel officiating. Interment will be at Pleasant Hill Cemetery, Blairstown with Military Honors by the Blairstown American Legion.

Mary was born on August 7, 1921 in Belle Plaine, Iowa, the daughter of Vincent and Antonia (Janurek) Vosatka. She graduated from Belle Plaine High School in 1939, and attended a local business college there. Mary later worked as a secretary for the U.S. Corps of Engineers and in U.S. Lady Marine Corps during World War II. She and John W. Thorman were married April 24, 1947 after John returned from four years of service overseas.

They farmed their Century Family Farm until John's passing on August 15, 1998. Mary remained on the farm until health issues required her to move to Windsor Manor in Vinton in 2012, and later to the Virginia Gay Nursing & Rehab Center. She loved her life on the farm, compared only next to the family with which they were blessed.

Mary was preceded in death by her parents; husband; three brothers, Joe Malecek, Charles Malecek, and Frank Vosatka; and great-granddaughter, Claire Recar. Her many beloved pets also welcomed her to Heaven.

The family wishes to thank the Virginia Gay Hospital Nursing & Rehab Center's team for their excellent care and professionalism. They were "family" to Mary also.

In lieu of flowers, memorials may be directed to the family or a charity of your choosing. Online condolences may be left at www.neuhausfuneralservice.com

Hrabak-Neuhaus Funeral Home is in charge of arrangements.

HM May 19, 2022, 4:29 pm Sorry to hear of your mother's passing. A great person. The kind of person you are glad you were able to meet. My sympathy to the Thorman family.
advertiser content