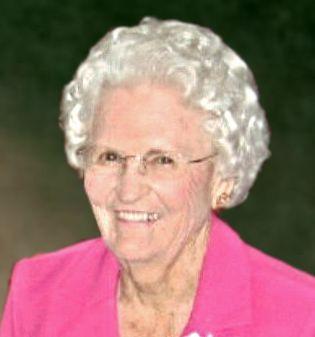 Virginia Elizabeth Hupfeld died peacefully in her sleep on Tuesday evening, April 12th. She was born the daughter of Emma (Gross) and Edward Wurtzel on March 30th, 1923 in rural Dysart, Iowa. She graduated from Dysart High School in 1941. She had two sisters, Lola Petersen of Dysart, Iowa, and Majorie Leise of Conrad, Iowa. They, along with her parents, and husband preceded her in death.

Virginia loved the farm and enjoyed assisting her father with farming. Then on January 23, 1949, she married Ralph Hupfeld of Dysart, Iowa. Virginia and Ralph continued to farm. They had four daughters, Joyce Brunssen, Marilyn Campbell, Linda Riseley, and Barbara (Stewart) Lee.

Her grandchildren include Kyle (Cindy) Brunssen, Mitch Brunssen and Carrie Brown, Alissa (Zach) Mann, children of Joyce and Craig Brunssen (deceased), and Austin Riseley, son of Linda and David Riseley (deceased). Virginia loved spending time with her grandchildren. Fortunately, the Brunssens lived across the road and Austin Riseley would come from Oklahoma to visit during the summers.

As the grandchildren matured and married, they too had their families. Nothing gave Virginia more pleasure than seeing her great-grandchildren. Even as Alshemizers took her abilities, she would light up and smile when the little "great grands" came to see Grandma Great. The great-grandchildren include Anastasia Brunssen, Isaak, Nate, Levi, Jackson Schmitz, and Aubree Brunssen- parents Kyle and Cindy Brunssen; Maddie, Kellen, and Rilynn Mann- parents are Zach and Alissa Mann.

Virginia lived a good life on the farm. Her cooking and baking skills were impressive and she would invite anyone at her home to sit down for a meal. She remained on the farm until she was 96. Then she resided at the Lutheran Home in Vinton, Iowa until her passing. She just turned 99 years old on March 30, 2022.

KH April 18, 2022, 4:44 pm Joyce, my deepest sympathy on the loss of your Mom.
I remember her from our Cowbelle days and you too.
God bless all of you as you grieve your sad loss.
Karen Hagen