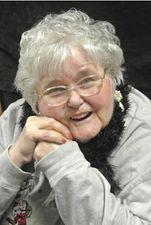 Jeanne Eleanor Crosby, 90 of Vinton, Iowa passed away at Mercy Hospital in Cedar Rapids, IA on February 17th. She was a 16-year resident of the Vinton Lutheran Home, where she was taken care of with love and treated like she was their own family by the staff. A celebration of life will be held in April.

Jeanne was born August 3, 1931, to Clarence Stratton and Ella (Walters) Stratton. She graduated from Lincoln High School in Vinton, Ia. Jeanne was united in marriage to Raymond Crosby on August 28th, 1965, in Vinton, Ia.

Jeanne was raised in Mt. Auburn, Iowa. She was a member of the Mt. Auburn Legion Women's Auxiliary. She held various jobs throughout her life. Collins Radio, Vinton School Cafeterias, and cooking for fraternities and sororities in Iowa city, Iowa. One of her greatest loves was the childcare she helped provide, for Eric and Sarah Hummel and later her Great Grandchildren Julie Nicole and Kelli Erin Cox.

Jeanne enjoyed crafts of every kind. In her younger days she could be found picking cat tails and milk weed pods in the ditches of Benton County. She was very talented and made all kinds of wonderful gifts for her friends and family. She loved sewing, making clothes for her children, grandchildren, and great-grandchildren.

Jeanne was proceeded in death by her parents Clarence and Ella Stratton. Her husband Raymond Crosby. Her brother Robert Stratton and her son Michael Stratton.