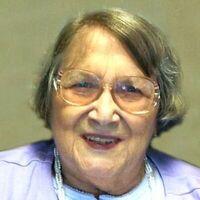 Funeral services will be held at 10:30 AM, Thursday, February 24, 2022 at the Phillips Funeral Home Chapel (212 E. 6thStreet) in Vinton, with Pastor Philip Borleske officiating. Visitation will be held from 9:00 AM until service time on Thursday at the funeral home. Interment will be held at Oakwood Cemetery in Shellsburg.

Marie was born on August 6, 1927 near Oran, Iowa, the daughter of Herman and Matilda (Plutz) Bathke. She graduated from Oran High School.

On June 11, 1949, she was united in marriage to Raymond Krueger in Oelwein. Following Raymond's death, she married Charles F. Storey on August 15, 1985. Marie worked as an assembler at Square-D in Cedar Rapids for 35 years.

She was an active member of Grace Trinity Church in Shellsburg, where she attended bible study and participated in the lady's circles of the church. Marie enjoyed crafts as well as knitting and crocheting. She corresponded with her pen-pal Eileen in Kent, England for over 30 years. Marie loved polka music and enjoyed dancing, traveling, attending flea markets and camping with Charles.

She was preceded in death by her parents; her husbands, Raymond and Charles; sonTerry Dean Krueger; 2 grandsons, Raymond Barlow, and Tye Sanders; her brother, Lawrence Bathke; and her sister, Loretta Warnke.

The family would like to thank the staff at Virginia Gay Hospital, VGH Nursing and Rehab and Hospice Compassus for the wonderful care Marie received.

DM February 22, 2022, 10:22 am Tina I am so sorry to hear of your grandmother's passing. She was a sweet lady. I enjoyed visiting with her when I was laundry and housekeeping. My condolences
advertiser content