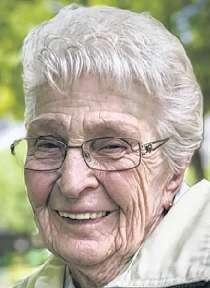 Erna was born Dec. 23, 1926, the daughter of Henry and Grace (VonRoden) Nissen. She attended country schools in the Jones County area.

"Bob" Klinefelter on Jan. 17, 1945, and they made their home near Anamosa. They later moved to Morley, Iowa and farmed from 1950-1964. They moved to their acreage on the Ridge Road above Stone City, which they loved while Bob was employed by Anamosa Community Schools as Transportation Director for 22 years. Sometime following Bob's passing in 2000, Erna moved to Vinton, Iowa, for a few years. Three years ago, Erna with her daughter JoAnn (Larry) Hoefle moved to Cedar Falls, Iowa, where Erna lived until her death.

Erna was preceded in death by her husband, Bob; her parents; brother, Carl Nissen; her sister, Marcella Hubbard; and in-laws, Rachel and Harlan Main, Bill and Addie Eilers, and Selma Johnston.

Anyone who knew Erna knew she was loving and kind to everyone, spunky and feisty for what is right. She was an excellent cook, loved to have family and friends over for meals, was famous for her canned tomatoes, special recipe sweet pickles, beet pickles, frozen corn and was willing to share with everyone.

Erna was baptized along with Bob as one of Jehovah's Witnesses on Jan. 2, 1954. She was very active in the Anamosa Congregation, later in the Vinton Congregation and the Cedar River Congregation of Cedar Falls. She had a very active share in the door-to-door ministry, sharing with everyone who would listen, the Bible's promise of the New World, a coming paradise right here on earth, a promise she held very dear.

A memorial service conducted by Ken Albrecht will be held at a later date. Goettsch Funeral Home has taken Erna and her family into their care. By visiting goettschonline.com you may share your thoughts, memories and condolences with Erna's family and sign the online guest book.

KN February 21, 2022, 3:18 pm My thoughts are with the family.
JH February 22, 2022, 1:56 pm Erna was such a wonderful woman who enjoyed all her friends and neighbors. We will miss her so much, but look forward to the Bible's promise of a ressurection back to earth, young and healthy to enjoy life the way it was suppose to be until then RIP
advertiser content