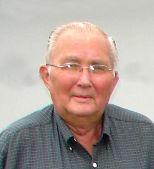 Dale LeRoy Pippert, Vinton passed away on Wednesday, February 16, 2022, at the St. Lukes Hospital Hospice Unit after a struggle with dementia and covid.

A luncheon will follow at the Bethlehem Lutheran Church in Vinton.

Interment will be in the Dysart Cemetery following the luncheon.

Condolences may be left at: www.phillipsfuneralhomes.com.

Dale was born on January 17, 1937 to Walter and Dora (Bockhaus) Pippert Roseberg on the farm near Dysart, Iowa and grew up there with brothers Ned, Carl, and Fred, and sister Carole Ann. (Another brother Edward passed away in 1932 before Dale was born.)

Walter, their father, passed away unexpectedly in 1942 when Dale was only 5, but the family continued farming in spite of this. When Dale was 10 years old his mother Dora married Otto Roseberg, a Garrison area farmer. As a result the family moved to join Otto on the Garrison farm and Dale attended Garrison schools until his graduation in 1957. During those Garrison years Dale often raised and groomed steers as part of 4-H projects for the fair. And of course everyone worked tirelessly on the farm raising pigs, cattle, milking cows, and growing row crops.

Once the family retired from the farm Dale worked for Wilsons/Farmstead in Cedar Rapids until his final retirement.

Dale loved gardening and keeping his yard in tip-top shape. He also very much enjoyed his years of fun with family and friends around town and at his Cedar River cabin with many a barbecue, pig roast, and late night bonfire to share.

Dale was a life-long member of Bethlehem Lutheran Church in Vinton.

Dale was preceded in death by his parents, Walter Pippert and Dora and Otto Roseberg and his brothers, Ned, Edward, Carl and Fred, and sister Carole Ann.

Dale's family would like to offer their sincere gratitude to the doctors and staffs that have provided care, especially St Lukes Hospital and their hospice unit, and The Keystone Care Center for the excellent and loving care that Dale received.

Memorials are suggested in lieu of flowers and may be directed to Catherine Janssen, 6665 21st. Ave. Van Horne, Iowa 52346 for donation to Bethlehem Lutheran Church.

Phillips Funeral Home - Vinton is in charge of arrangements.

TN February 21, 2022, 3:46 pm Sorry to hear of Dale’s passing. I always enjoyed my visits with him.
TVE February 22, 2022, 1:58 pm I’m sorry to hear about Dale, he was a very kind man. Every time he came in to my office he asked me a lot of questions about his insurance policy. I always answered his questions. He always thanked me.
AI February 26, 2022, 9:00 am I'm very sorry to hear of Dale's passing. He was truly one of the nicest and most giving guys I've ever met, as well as one of the best neighbors I've ever had. He will be sorely missed. My thoughts go out to all his family and wish them all endless happy and loving memories of Dale. And Daryn, I hope your doing well through this, I know you and Dale were very close.
advertiser content