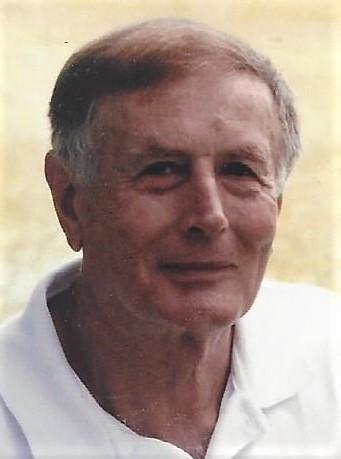 A Mass of Christian Burial will be held at 10:30 a.m., Friday, February 18, 2022, at St. Mary Catholic Church in Vinton with Father Jim Brokman as celebrant. Interment will be held at Holy Rosary Catholic Cemetery in LaMotte with Father David Ambrosy as celebrant. Friends may attend a visitation from 4 to 7 p.m. on Thursday, February 17, 2022, at Van Steenhuyse-Teahen Funeral Home Chapel, 1212-1st Ave, Vinton.

John was born December 23, 1932, in LaMotte, Iowa, to Herbert and Leona (Wathier) Pitz. John earned his education degree from Iowa State Teachers College (UNI) in 1955. On July 30, 1960, John was united in marriage with the love of his life, Janice Manders, at Holy Rosary Catholic Church in LaMotte.

John spent his entire 40-year working career in education and athletics as a teacher, coach, and athletic director in the Iowa school districts of Stanhope, Coon Rapids, Lake City, and eventually arriving in Vinton in 1973, retiring in 1995. Upon retirement, John had more time to follow his favorite teams, the Iowa Hawkeyes and Chicago Cubs, and he continued to have a positive impact on those around him as a husband, father, grandfather, great-grandfather, and friend. Whether it be at the family game table playing cards and board games, or on the golf course, John always enjoyed friendly competition. One of John's gifts was never meeting a stranger, always able to strike up a conversation and make connections with people from any Iowa town.

John lived a full, faith-filled and blessed life with his wife, Janice, their six children, twenty-six grandchildren, eleven great-grandchildren, and an incredible circle of extended family and friends.

John was preceded in death by his dear wife, Janice Pitz, in 2010; parents Herbert and Leona Pitz; brother, Donald Pitz; great-grandson Elysian; and many other extended family members and friends.

John is going to be greatly missed by those blessed to know him. He touched the lives of many, brought out the best in those around him, and had an uncanny ability to make people laugh. Although John will be deeply missed, his family finds great comfort knowing that he is being reunited with his beloved bride, Janice.

The family appreciates the care that John received from healthcare providers and care center staff in his final years while at Virginia Gay Nursing and Rehabilitation Center.

A memorial fund has been established in John's name or may be directed to a charity close to your heart in John's honor.

Van Steenhuyse-Teahen Funeral Home of Vinton is caring for John and his family. Condolences may be left at www.teahenfuneralhome.com.

Mark Hilliard February 15, 2022, 6:16 pm My deepest sympathies. I have many fond memories of Mr Pitz as my teacher. His love for the overhead projector is legendary. He was a kind man, a great father and a valuable member of the community. He will live on in the memories of all his students.
advertiser content