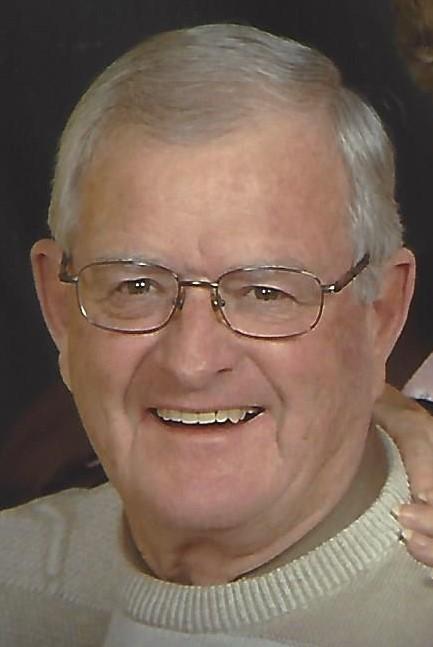 Funeral services will be 10:30 a.m. Saturday, September 4, 2021, at the Wesley United Methodist Church in Vinton with Rev. Brian Channel officiating. Visitation will be 4 to 7 p.m. Friday, at the church. Burial will be in Evergreen Cemetery, Vinton with full military rites.

Ron was born June 29, 1935, in Boone, IA, the son of Jack and Deloris Dean Dowd. He was a graduate of Lincoln High School, Vinton and the University of Iowa where he received a degree in Business. He was also a member of the Fraternity Delta Upsilon.

On June 21, 1958, Ron married the "love of his life", Kay Crisman at the Wesley United Methodist Church, Vinton. Ron was a member of ROTC and from there, entered the US Army as a lieutenant where he proudly served for two years. He continued his service for four years in the National Guard. Upon returning to Vinton, Ron joined the family retail business, Michael & Dowd, retiring in 2010. During his business years, Ron's customers became as family and customer service was paramount.

Ron was a member of the Wesley United Methodist Church, Vinton Kiwanis, Vinton Country Club and the Vinton Chamber of Commerce. He served on the boards for Vinton Transportation, Cedar Valley Nature Trail, Evergreen Cemetery, Vinton Library and thirty-three years on FSB&T. He was a huge Iowa Hawkeye fan, loved golfing, bowling, fishing and attending his grandchildren's sporting events.

Ron was preceded in death by his parents; brother, Larry Michael; and sister, Joan Harrison.

Van Steenhuyse-Teahen Funeral Home is caring for Ron and his family. Condolences may be left at www.vsrfh.com.

Carole O’Deen Daniel August 27, 2021, 1:11 pm Kay, My condolences to you and your family.
Vicky Hunter August 27, 2021, 3:33 pm Kay so sorry to hear about Ron. He was the very person that actually greeted me to town and from there on we were good friends. Will miss him and we miss seeing you also. Take care. The Hunters
Terry Lee August 27, 2021, 6:25 pm So sorry. We had many good times at the Country Club. I remember you delivering a dining room set to us in Vinton.
Mary Jones August 27, 2021, 7:43 pm One of the best in business condolence to the family
Dorothy Clang-Scozzafava August 28, 2021, 10:15 am Dear Kay and family. Ron will be greatly missed. I dated Ron for a short time in high school.He and Larry shared their 1929 Plymouth Coupe and I'm sure there were arguments regarding which brother would have use of it when date nights rolled around.
Deb Christianson August 28, 2021, 5:31 pm What a loss for the whole community and especially to his family. He was a real treasure.
advertiser content