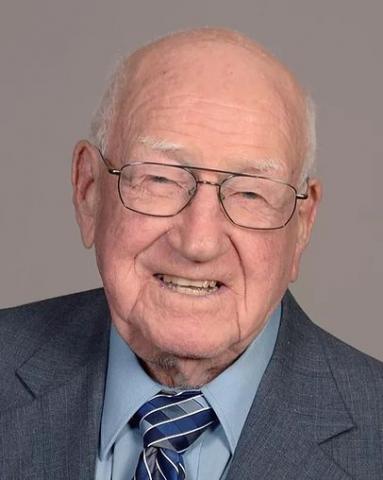 Melvin August Krug, 95, passed away peacefully on Friday, June 4, 2021, at the Gardens of Cedar Rapids with his family by his side.

Funeral services will be held at 10:30 AM on Tuesday, June 8, 2021, at St. Stephens Lutheran Church in Atkins with Rev. Douglas Woltemath and Rev. Jeff Schanbacher officiating. Interment will be held at St. Stephens Cemetery, with graveside military rites by the Adolph H. Schueller American Legion Post #217 of Atkins and Iowa Military Honors. Friends may call from 4:00 until 7:00 PM Monday at the Church Sanctuary in Atkins. In lieu of flowers, please make a donation to your favorite charity. The service will be live-streamed at the St. Stephens YouTube channel: https://www.youtube.com/channel/UCaiiD_6Y7RgcEQw2OcinKKw/featured

Melvin was born on October 2, 1925, to August and Elizabeth (Happel) Krug on the Century Farm, now farmed by his grandson. He was baptized on October 25, 1925, and confirmed on April 10, 1938, at St. Stephen's Lutheran Church, where he was a member his entire life. He attended St. Stephens Lutheran School and graduated from Atkins High School in 1942. Melvin served his country in the United States Army during World War II and was discharged in 1946. On September 2, 1948, he was united in marriage to Mary Ann Ludvicek at St. Stephens. Melvin was a lifelong farmer and enjoyed membership in the American Legion on the local and county level, and the VFW. He also held numerous positions in his church and was a member of the Christian Couples Club, Community Club, numerous card clubs, and was a 4-H leader. He was a long-time volunteer at Mercy Hospital, logging over 4,000 hours. In his free time, Melvin loved watching Hawkeye Basketball and Cubs baseball. He was also privileged to take the Honor Flight in 2010 with his daughter Deanne. Melvin lived by and for the 3 F's: Faith, Family, Friends.

The family wishes to thank The Gardens of Cedar Rapids and Mercy Hospice for the loving care given to Melvin, especially these last few days.