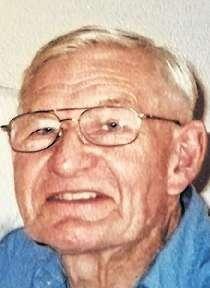 With much sadness, the family of Dean Myron Rammelsberg, 97, announces his passing April 2, 2021. Dad passed peacefully in his home at the Iowa Veterans Home, Marshalltown, Iowa.

Dean was born Oct. 26, 1923, in Newhall, Iowa, to Arthur Rammelsberg and Elizabeth Van Voy. He grew up in Newhall and Iowa City, where he graduated from Iowa City High School in 1940. Dean proudly served in the U.S. Navy during World War II on the USS Goshen. He was an amphibious forces motor machinist from 1944-1946 and was honorably discharged.

Dean then moved back to the Coralville/Iowa City area where he met and married Shirley J. Terrell on Feb. 14, 1949. Dean became a loving and devoted father to their four children. The couple was later divorced.

Dean worked for The University of Iowa as a custodian for over 30 years, retiring in 1986. After calling the Coralville/Iowa City area home for over 60 years, he moved to the Iowa Veterans Home in April, 2003.

Dean was active in his community and enjoyed helping others. He was a long time member of the United Church of God. Dean was a joy to be around, loved the simple things in life, and had a great sense of humor. A proud father, grandfather and great-grandfather, there was nothing he loved more than family. Dean was also an incredible gardener and no matter where he lived, he always had a garden to tend.

Dean was preceded in death by his parents; daughter, Evelyn "Evy" Crews, in 2017; and granddaughter, Jennifer Rammelsberg, in 2018.

A private funeral service will be held at 11 a.m. Friday, April 23, for the immediate family. The service will be livestreamed so other family and friends of Dean can celebrate his life. The link to view the service may be found on the Tribute Wall on Dean's obituary page at www.lensingfuneral.com.

In lieu of flowers, memorial donations may be made in his honor to a charity of your choice.

Online condolences or memories of Dean may be shared with the family at www.lensingfuneral.com.