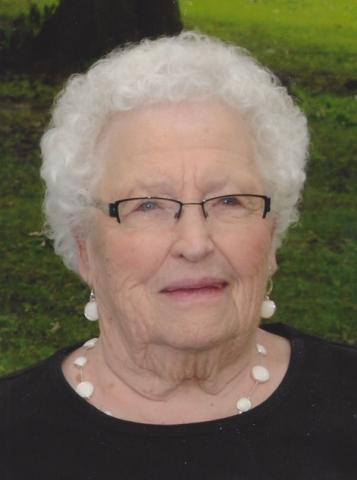 Visitation will be from 4:00 p.m. - 8:00 p.m., Friday, April 9th at St. Mary of Mt. Carmel Catholic Church, Eagle Center and for an hour before services Saturday at the church. Memorials will be directed to Camp Courageous of Iowa in Monticello, IA, and to Don Bosco High School in Gilbertville, IA.

A livestream of the funeral mass will be made available on the "White Funeral Home & Mt. Hope Cemetery: Iowa" Facebook page. Face coverings and social distancing will be expected.

Patty was born March 17, 1922, in Tama County, IA, the daughter of William Klein and Gertrude (Gibson) Klein. She was a lifelong member of St. Mary of Mt. Carmel Parish and graduated from St. Mary High School with the class of 1940. On November 5, 1941, she was united in marriage to Robert Joseph McKenna, her high school sweetheart, at St. Mary of Mt. Carmel Catholic Church. As they began their life together, they farmed and raised their family. They had 67 years together before Bob preceded her in death on July 25, 2009. Patty enjoyed dancing and playing cards, crocheting, taking bus trips to casinos, she enjoyed social events and people. She knew the importance of life's events and always remembered her family by sending cards to each until her eyes failed in the past 2 years. In addition to the church she was a member of the St. Mary's Rosary Society, Catholic Daughters of the Americas Court 49 in Waterloo, the Red Hot Peppers Club and the Vinton 4th Street Diner Card Groups.

In addition to her husband, Robert McKenna, she is preceded in death by her parents; her daughter, Peggy Krafka; one son and daughter in law, Bill and Earlene McKenna; daughter in law, Eileen McKenna; and two sons in law, Ronald (Ron) Schmitt and Don Selken.

White Funeral Home, Jesup, Iowa is in charge of the arrangements.