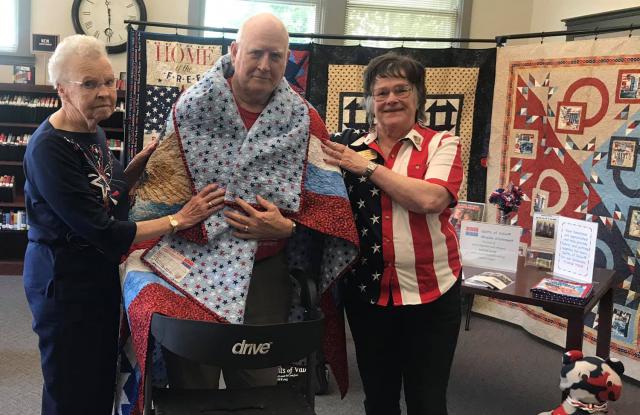 Tuesday, the Vinton Public Library was the site of another awarding of a Quilt of Valor for a Vinton Serviceman. Milo Kearns served in the Navy on the USS Hornet from 1966 until 1970, during the Vietnam war. As with most veterans, he downplayed his service on the USS Hornet, but also proudly sported his shirt displaying a picture of his ship.

He also showed his dog tag which was worn throughout his time in the service. Spelling his last name incorrectly as "Kearnes" he couldn't get a corrected dog tag. During his service, the Navy saw that Milo Kearns had passed away. He had, but it was his grandfather. Of course, convincing the military that he should still receive his pay when they are convinced that you're dead is pretty difficult. He finally said, "If you're not going to pay me, I'm not going to work." Soon they discovered that he was indeed still standing there, alive and well.

While serving on the USS Hornet, his job was to keep the planes flying, his job title, structural mechanic. He gave planes a full examination included checking to make sure that hoses weren't damaged or in need of replacing, checking the body of the plane for damage like bullet holes. Most of his time deployed was spent repairing planes while he was on the ship.

As a member of the Naval Air Force Squadron VS35, he crossed the international dateline 6 times, the equator twice, and on the ground in Vietnam 3 times.

Returning home from Vietnam, veterans were greeted with hostility. They were often spat on and called names by war protesters, and Kearns was treated no differently upon his return. In 2017 Kearns was able to take an Honor Flight and his return home was to a much warmer welcome.

Quilts of Valor attempts to give servicemen quilts in an attempt to give the veterans a comforting hug in an attempt to make the memories of serving in war a little more bearable. Rita Moore of Vinton created the quilt and will also be presenting another quilt this week. She has made 79 quilts which have been part of these veteran presentations, she is 21 quilts away from her goal of creating 100. 271,480 veterans have been honored with a Quilt of Valor across the country and others parts of the world. The quilts are accompanied by a thank you card for the veteran as well as a pillowcase to carry the quilt in.