Entertainment : The Last 5 Years, Brings Superb Musical Performance to the stage of ACT I 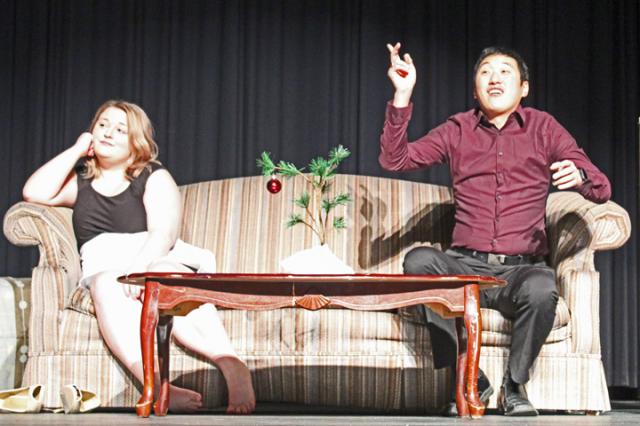 I have to admit, as I went to watch "The Last 5 Years" at the Palace during one of the dress rehearsals I knew it was going to be a tough one to see for me. I went in the door gritting my teeth and hoping to manage to pull off a cool demeanor as I prepared to watch the show. A very well written piece by Jason Robert Brown about a couple and their struggles in marriage.

From her perspective, she feels alone in the relationship and he as well. Of course, there were the expected twists and turns, but it was in a pretty tasteful presentation.

The two performers were excellent in both taking on the characters as well as singing. I could have listened to the two of them sing all day. The show was performed byTyler Hagy and Katie Stuelke aka Jamie and Cathy.

A bit about the actors:

Tyler Hagy (Jamie): Tyler is an active performer, conductor and educator, based in Cedar Rapids, IA. He currently serves as the Director of Choral Activities at City High School in Iowa City. Recent roles include Benjamin Coffin III in Rent, Ezra Chater in Arcadia, Don Pedro in Much Ado About Nothing, Truffaldino in The Servant of Two Masters, and Moritz Stiefel in Spring Awakening. Tyler is so excited to be on stage in this production! The Last Five Years has been his favorite musical since his sophomore year of high school (an eon ago!), so he is thrilled to finally play his dream role! Thank you to Monica and Michala for taking a chance on this newcomer to the ACT I stage and to Lori and Katie for their tireless work to make this dream a reality!

Katherine Stuelke (Cathy): Katherine is thrilled to be doing her 10th show with ACT I! Her first ever role was as Gretl in ACT I's The Sound of Music at the age of seven. Ten years ago, she was cast in her first lead role as Patrice in another ACT I Jason Robert Brown musical, 13, where she met her now-husband Ian. Katherine went on to play leading roles in her high school productions of Cats, Oliver!, Oklahoma and Zombie Prom. During her four years at Luther College, she branched into opera, where she performed such roles as Gianetta in The Gondoliers, Fiordiligi in Cosi fan tutte, and Madame Lidoine in Dialogues of the Carmelites. When she isn't singing (which isn't often), Katherine works with Green Iowa AmeriCorps at the Vinton-Shellsburg School District, utilizing her degree in Environmental Policy.

If you enjoy music, you too will be mesmerized by the vocal talent as well as the facial expressions of the two as they took on the character of the couple that they represented.

I would have to give this presentation 5 stars, 2 thumbs up, and any other top of the line reviews.

Previous Entertainment Article
Review for Act I: The Last 5 Years