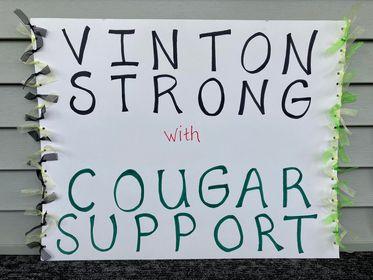 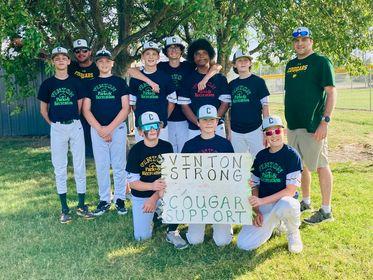 The Cedar Rapids Cougars show their support to the Vinton baseball team.

Following the Riverside Park arson incident a few weeks ago, a baseball team from Cedar Rapids, wanted to do something. Anything. They wanted to let the Vinton team that they would be playing that they too felt the impact of the town's loss. Jennifer Wagner, one of the parents tossed around several ideas to find a way to let Vinton know that the kids in Cedar Rapids were rooting for them.

The team showed up in Vinton on Thursday night, wearing Vinton Parks and Recreation shirts to show their support for the Vinton team. The team warmed up in the shirts and then presented a poster that they had all signed to present to the Vinton team. The sign read simply, "Vinton Strong with Cougar Support." The Vinton team immediately displayed the sign in their dugout during the game.

Vinton will be traveling to Cedar Rapids for another game next week, where the team made up of 13-year-old players will once again welcome the team and show their support in their Vinton Parks and Recreation shirts.

To the Cedar Rapids Cougars, thank you!