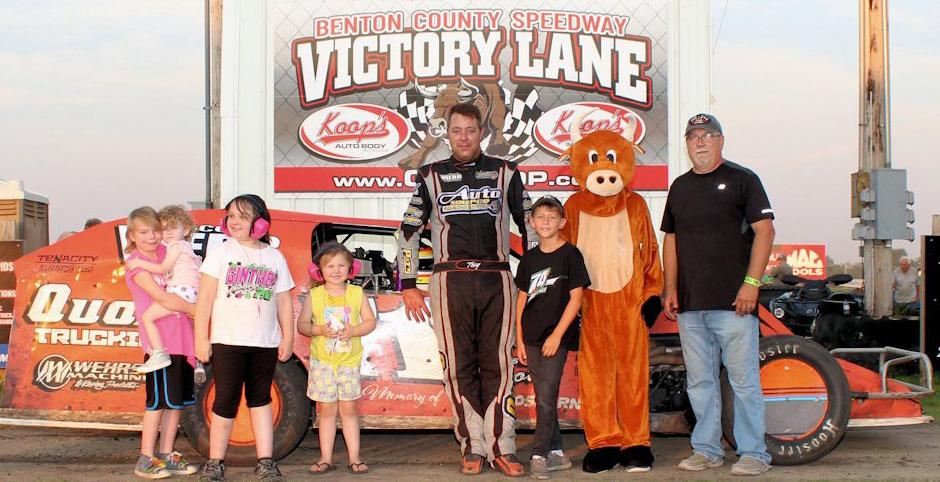 Troy Cordes raced to his 5th IMCA Modified win this season on Sunday at Benton Co. Speedway (Wittke)
With the weekly points battles entering the final month of the season, drivers who'd already experienced success this season at Benton County Speedway made return trips to the winner's circle Sunday night at The Bullring.
Although it had been nearly two months since his most recent win on the quarter-mile, KISS Country 96.5 IMCA Modified driver Troy Cordes showed why he's the point leader in the 20-lapper for that division.From a third row start, Cordes worked the top side into contention and past early race leader Jesse Belez prior to the midway point. He then set sail to drive to his fifth win of the season ahead of a charging Dylan Thornton. Jeff Aikey, Derrick Stewart and Mark Schulte completed the top five.Dallon Murty continued his mastery in the IMCA Sunoco Stock Cars presented by Albert Auto Service. From a mid-pack start, Murty took just a few laps to race into the lead and build over a straight-away advantage in that 15-lapper.Meanwhile, Texas visitor Shelby Williams raced from the fifth row and methodically cut into Murty's lead. Williams closed to the inside of the race leader on the final lap, however Murty proved to be too strong off the corner to seal his sixth win of the year. Michael Peterson ran third ahead of Jay Schmidt and Leah Wroten.Also running the top side, point leader Tony Olson emerged victorious in the 15-lap main event for the Karl Kustoms IMCA Northern SportMods presented by Christie Door Company.From row three, Olson wasted little time making his way out front to pull away from the pack. He took the checkers ahead of Ben Chapman, Tyler Soppe, Kyle Olson and Joe Docekal.Kaden Reynolds raced to a track-leading seventh win of the year in the IMCA Sunoco Hobby Stocks presented by Kwik Star.Reynolds ran away and hid to take the checkers by more than a straightaway ahead of point leader Joren Fisher, who nipped Matt Brown at the line for runner-up honors. Gustin Ginther and Jacob Floyd rounded out the top five.Ashley Reuman made her second straight visit to victory lane in the Mach-1 IMCA Sport Compacts presented by Auto Crafters. Reuman won a mid-race battle with Korey Lana to drive to the victory, her third of the season. Lukas Rick, Logan Clausen and point leader William Michel rounded out the top five.Big money is on the line in all five weekly divisions Sunday, August 1, for Autism Awareness Night. Legends cars will join that evening's program.For the latest Bullring news, visit BCSBullring.com or check out the track's Facebook page @BCSBullRing.