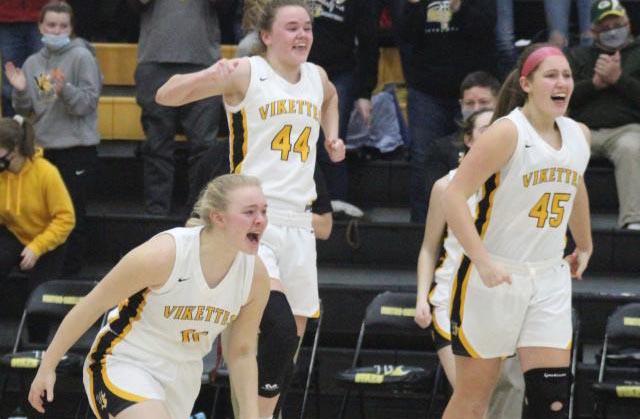 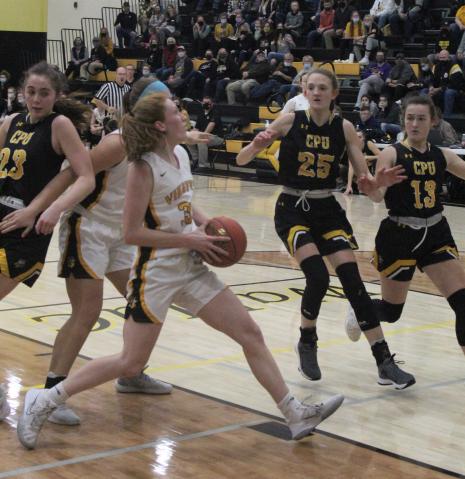 VINTON -- "A win like this...well, it just makes the weekend that much more fun!"

Those were the words of Vinton-Shellsburg head girls' basketball coach Rich Haisman Friday night after his 15th-rated Vikettes stunned No. 4 Center Point-Urbana, 38-34 in an amazingly incredibly wonderful victory in the friendly confines of the Garrison Fieldhouse. The win was the Vikettes' first over the Stormin' Pointers since the 2010-2011 season and was very likely the biggest V-S girls basketball win in two decades.

With 5:48 left in the first quarter, CPU's Claire Neighbor made a free throw to give the Stormin' Pointers a 5-4 lead; it would be their last point for the next 14 minutes. The Vikettes did not exactly char the nets after that, but they did manage a three-pointer from Abby Davis to take a 7-5 lead after one. Again the second period was not steller for the home team, but it was better than it was for the vistors.

In second period, the Vikettes hit some key shots, played textbook defense and managed to hold CPU scoreless for the duration, taking an impossible, improbable, incredible 16-5 lead in the halftime break.

Yes, 16-5. The thing was though, a savy, tournament-tested group of Stormin' Pointers, paced by future UNI Panther Ryley Goebel, was not going to go gently into that good night. With Goebel leading the charge, CPU exploded for 20 in the third period, but the Vikettes countered with 12 of their own. The lead dropped to three, but it was still a lead, 28-25.

But with six minutes left in the game, Goebel -- who'd accounted for 10 of CPU's point at this point -- fouled out, and the Vikettes were in the driver's seat. CPU managed to get close on a number of occasions, but the Super Seniors and their Super Sophomores wouldn't give it. Alyssa Griffth's free throw with three seconds left sealed the deal, and the celebration began.

"This was a big win for us," Haisman said. "Neither team could get going offensively in the first half, but our defense was fantastic during that stretch."

The Vikettes (12-2) will host South Tama Tuesday night at the Fieldhouse as they start their second run through the WaMaC West.

Next Sports Article
Vinton puts Independence in the gutter