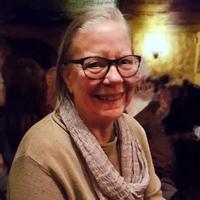 Betty Jean Rogers, 76, of Marion, died at home with her loved ones by her side after a long struggle with cancer on Wednesday, February 16, 2022. Teahen Funeral Home is serving Betty's family.

Betty was born to Frank and Morine Van Steenhuyse on March 5, 1945. She joined three sisters Elodie, Nancy, and Linda. Her younger sister Mary would soon join the family. She was raised in Blairstown, Iowa, and completed her elementary and secondary education in the Blairstown school system. She entered Mount Mercy College in 1963, graduating in 1967 with music and biology as her major areas of study.

Soon after graduation, Betty moved to Iowa City where she worked at the Catholic Student Center, then attached to St. Thomas More parish. She was active in what was then known as the "folk mass." She met her future husband John after one of these masses in 1968. The relationship grew and they were married at St. Thomas More in August 1969. After John's completion of graduate school, the couple moved to Cedar Rapids where they lived until moving to Marion in 2015.

Betty will be remembered for many things. Her musical abilities were nurtured by her parents from a young age. She was singing and playing piano as early as age 4. She participated in many choirs, impromptu singalongs, and sang for her own and others' enjoyment. Her affection for music also was expressed by her love of listening to live music, especially jazz and blues, performed in small venues by local musicians in the Corridor. She befriended many local musicians this way.

In 1971 Betty started working as a paraprofessional at Stewart Memorial Library (Coe College). Her love was reference work, not only for the service it provided to faculty and students, but for how it enlarged her own fund of information. In this job, she refined and developed her reference skills, mentored many students and colleagues, contributed to the changes as the library transitioned to electronic information storage and services, and became involved in state and national professional library organizations. She served several years as President of the Iowa Library Association. In 1990 Betty graduated from the U of Iowa Library School with a Master of Library Science, after which she became the head of the Reference Department at Stewart Memorial, a position she held until her retirement in 2007.

Betty saw spirituality in the many forms of nature she embraced. She loved the natural environment - plants, trees, flowers. She also loved animals - birds, butterflies, deer in the backyard, happy cows, and donkeys. For several years she has contributed to the care of 4 rescued donkeys at the Donkey Sanctuary in Ireland. And for most of her adult life, she provided a loving home to her many cats, one of which lived to age 27.

As a reference librarian, she was naturally an informed traveler. With her many trips to Ireland, she became fascinated by and enamored of the natural history, ancient archaeology and architecture, and the relics and vestiges of cultures that inhabited the land. She rode a camel in Morocco, reveled in tasting many local delicacies in France, stood in the bow of a whale watch boat as it plied the seas off Newfoundland, and enjoyed the sights and sounds of the open road behind her husband on their classic 1967 BMW motorcycle. She canoed the Boundary Waters twice and had a special affection for Gull Lake and Lake Hubert in Northern Minnesota, where she time spent each summer with extended family.

Betty was a fabulous hostess. She loved to plan extravagant parties, enjoyed preparation to the finest detail, and glowed in the enjoyment of her family and friends. Betty also poured her creativity and imagination into arranging flowers, taking photographs, writing stories and poetry, and her surroundings always reflected her many artistic interests and passions. She relished supporting her many visual artist and writer friends.

Betty was a strong woman-strong in expressing her beliefs about women's rights, social justice, Democratic politics and the need for a compassionate society for all citizens. She was strong in battling the health challenges she faced. She defeated 3 cancers, but the fourth proved too much.

The family would like to thank Drs. Wood and Lee of Hall Perrine Cancer Center, Drs. Hill and Sun of Holden Cancer Center, Nurse Kim of Right at Home services, and Nurses Aleighia and Kelly of Hospice of Mercy for their kind attention and expert care of Betty in her final days. A special thanks to Betty's niece Erin Hart for her loving and patient care of Betty in the last two weeks of her life.

A celebration of life will take place at a later date. Those who wish to make a donation in Betty's memory are encouraged to support Hospice of Mercy, Right at Home agency or the Donkey Sanctuary in Liscarroll, Ireland.