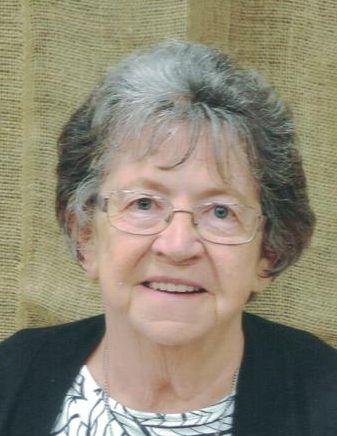 Mary Jane Fisher, who would have turned 87 on November 18, passed away at St. Luke's Hospital on November 3, 2021 after a sudden illness with loving family surrounding her.

Mass of Christian Burial will be held at 10:30 AM, on Tuesday, November 9, 2021 at St. John's Catholic Church in Blairstown with Fr. Craig Steimel as celebrant. Interment will be at Pleasant Hill Cemetery in Blairstown. The visitation will also be held at the church from 4 to 7 p.m. on Monday.

Mary Jane was born November 18, 1934 in Amana, Iowa the daughter of Benjamin and Marie (Westhoff) Wilhelm. She graduated from Blairstown Consolidated Schools with the Class of 1953.

Mary Jane was employed at the Coon Creek Telephone office for several years. Dewayne and Mary Jane then purchased the Blairstown Feed Mill on September 8, 1978, and both worked with the family business that expanded to Fisher Feed and Fertilizer in Norway for 30 years.

She was a member of St. John's Catholic Church. Her faith was extremely important to her.

Family meant the world to Mary Jane. Left to cherish the memories are her children:

She is greeted in heaven by her parents, husband Dewayne, brothers Jerome and Patrick Wilhelm; brother-in-law, Eldon Brecht and sister-in-law Betty Kimm; a great-grandson Bentley Tarvin.