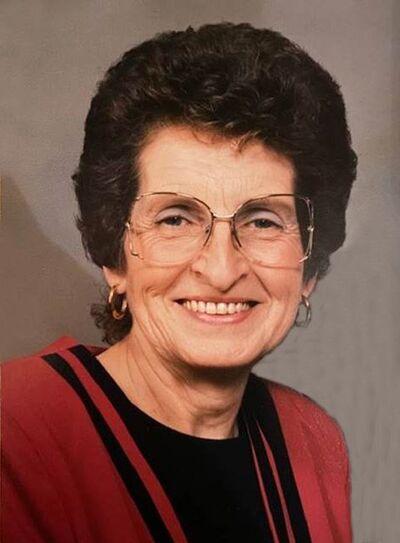 Marilyn Rhoads, 93, of Granger, IN, formerly of Keystone, passed peacefully of natural causes, November 25, 2020, while residing at The Hearth @ Juday Creek, Granger, Indiana.

Graveside services will be held at 2:00 PM, Saturday, August 21, 2021 at Evergreen Cemetery in Vinton.

She was born August 21, 1927, in Cedar Rapids, Iowa, to Roy and Hazel Appleton. She was united in marriage November 12, 1946, to Lloyd (Dusty) Rhoads. Surviving are her three children: Diana (Richard) Peck, MI; Michael Rhoads, PA; and Deb (Joel) Vogeler, IA; 9 grandchildren and 13 great grandchildren. She was preceded in death by her parents; husband in 2007; a brother, Roger Albert; and one grandson, Douglas Peck.

Marilyn attended 17 different schools, her father being a traveling salesman, and lived with her aunts at different times of her life. She graduated from Vinton, High School.

She lived in a time when women were homemakers and was accomplished where it counted, having many talents and hobbies. She sewed beautiful clothes for her daughters, reupholstered some of her furniture, crocheted afghans for her children and grandchildren and crafted wicker baskets to rival Longaberger's. To her delight she made teddy bears for herself and grandchildren with "Freddie" residing in her room. Being an excellent cook her family could not get enough of her homemade chicken and noodles, teaching two of her grandchildren so they could carry on the tradition. Cookies were always in her freezer for visits from the grandchildren. She canned or froze a variety of vegetables and became known for her tasty V-8 juice.

She was a girl's 4-H leader and bowled in a weekly league. Playing cards was a monthly activity for the ladies' card club she belonged to for over 40 years. Being a contributing member of the Garrison Methodist Church, she served on the board and cooked and organized meals for local events. An avid reader, she served on the library board in many positions, including President.

The family would like to thank the devoted staff at Juday Creek and her Heart to Heart Hospice team for their loving care.

Online condolences may be left a www.phillipsfuneralhomes.com

Carol A Geater August 17, 2021, 1:40 pm I enjoyed meeting your fun spirited mother while she attended my health club, Shaping You in Vinton. I will always remember her delightful laugh and smile from ear to ear. Heaven has gained an enjoyable Angel!
advertiser content