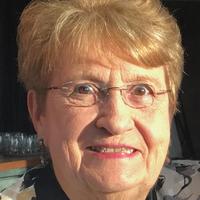 Funeral services for Lola F. Jennings, 87, of East Moline, IL, will be 10am Thursday at the Van Hoe Funeral Home Ltd., East Moline. Burial will be in Greenview Memorial Gardens, East Moline. Visitation will be 4-7 pm Wednesday at the funeral home. Mrs Jennings passed away Wednesday, August 11, 2021, at Bickford Cottage, Moline, IL.

Lola was born June 30,1934, to Arthur and Frances (Kron) Draker. She was one of six children. She attended St. Joseph Catholic School and Iowa City High. She was married to Hollis "Gene" Jennings on Feb 13, 1954 and together they raised four children.

Lola finished her working career as Cafeteria Manager at Blackhawk Area Education Center after other positions in the Moline School District. She was famous for her Taco Salad and Tater Tot Casserole. Previously she had worked at Elks Club, Pepperidge Farms and University of Iowa.

Lola was married to Gene Jennings for almost 63 years before his passing in 2017. Lola and Gene made lifelong friends everywhere they lived - Hills, Vinton, Sharon Center, Iowa City and East Moline. Those friendships meant so much to them.

Lola always thought of others including what they might eat. She was a friend who would do anything for you. She loved baking, cards (Hills Euchre, Canasta, Pinochle and Hearts), water exercise and entertaining her children, grandchildren and great-grandchildren. She would welcome all into her home. Lola's children, grandchildren and great grand-children were her life's love. She enjoyed attending their events. A snowman-decorated house always greeted family celebrating Christmas in her home. She loved Easter when everyone came to Grandma's for the Easter egg hunt. All of her descendants learned to care for others and share life's joys from her.

Preceding Lola in death were her parents, her husband, an infant daughter, four siblings, a daughter-in-law Jean Jennings and a grandson Samuel Knobloch.

In lieu of flowers, donations to the East Moline Public Library will be used to support the children section of the new library representing Mom's love for reading and children.

Per the family, masks are required at visitation.

Online condolences may be left for the family at www.vanhoe.com.

Roger Rinderknecht August 16, 2021, 2:28 pm I think this was the Lola and Gene Jennings that lived in our north farmhouse 6 miles southeast of Vinton Iowa, probably back in the late 50’s and early 60’s. Remember both Gene and Lola as the kindest, friendliest neighbors we could ever have had. They bring back wonderful memories of living on the farm.
advertiser content