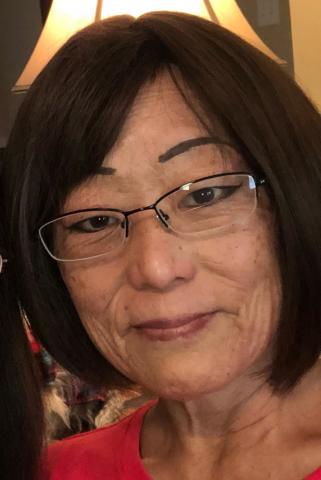 Kimberly, "Kim" Frank, 57, passed away Saturday, June 26, 2021 at UIHC in Iowa City, Iowa. Visitation will be held 4:00 to 7:00 p.m. Friday, July 2, 2021, at the Vinton Presbyterian Church. Funeral services will be 10:30 a.m. Saturday, July 3, 2021 at the Vinton Presbyterian Church with Rev. Jessica Crane-Munoz officiating. Burial will be in the Garrison Cemetery. The casket will be closed to the public.

Kim was born in Seoul, South Korea September 21, 1963, but her life truly started December 7, 1965 when she was flown across the world and was welcomed into the most wonderfully loving family. There was never a day that passed that Kim did not consider herself the luckiest daughter to be chosen by Myron and Helen Walthart. As the first adopted child in Benton County, it was then that Kim's legacy began.

Throughout her entire life, Kim set standards that others envied. She gave her best 100% of the time and was never one to give in or give up. After graduating from Washington High School, she attended UNI. While her original intention was to study social work, her true purpose for being placed in Cedar Falls was to meet and marry her husband of 33 years, Todd.

Early in their marriage, they had two daughters, Taylor and Peyton. Anyone that knew Kim knew her children were her world, but the truth is that she was theirs. She will be remembered as the most intelligent, strong willed, sassy and fierce mother and they consider themselves the two luckiest humans to have known her love.

Throughout Kim's adult life, she also mothered multiple pets who were her other children. Her "man dog", Boji and kitties Madison and Mason were her first furry loves, but her adoration for Dexxter, Howie and Emmie could not be matched. Her passion for animals was later used as encouragement for her daughters to start Better Together Animal Rescue, where Kim proudly served as President.

Although she was modest about her musical abilities, she was a talented singer. She and Todd created music for many years together and each of Todd's friends became hers as she hosted the annual IdiotJam. Her hospitality allowed each person, no matter where they traveled from, to feel like a member of an extended farm family.

When Kim wasn't busy snuggling with her dogs, she was usually found shopping at TJ Maxx or daydreaming about her next beach vacation. She worked hard every single day so that she could enjoy two weeks on the beach every summer.

For over 20 years, Kim worked as the Director of Human Resources at Virginia Gay Hospital. While there, her coworkers became her family and one of the best support systems for her. She left a legacy at Virginia Gay and will always be remembered for her dedication, early morning hours and extremely hard work ethic.

Over the last 57 years, Kim has made an impression on everyone that met her and is already missed an incomprehensible amount. The only solace in this tremendous loss is that Kim is now surrounded by her loved ones that have left before her. She was preceded in death by her two heroes, Myron and Helen Walthart, her brother, Duane Walthart, sister-in-law, Vanessa Lipscomb, brother-in-law, Scott Frank, family friend Betty Wright and furry children Boji, Madison, Mason and Dexxter.

She is survived by her husband, Todd, who will never forget all of the years spent with her and her daughters, Taylor and Peyton, whom will live the rest of their lives trying to be who Kim shaped them to be. In addition, she is survived by her two furry children, Howie and Emmie and furry grandchildren, Myles and Madden, as well as her brothers: Larry (Marlene) Walthart of Estherville and their daughter, Melissa; Dave (friend Tracy)Walthart of Vinton; two sisters: Lori (Dean) Williams of Vinton and their sons, Logan and Griffin (Anne and Evan); Linda (Arlen) Nannen of LeMars and their children, Mark and Jennifer; three sisters-in-law: Becky Walthart of Vinton and her children, Brian (Laura and Jackson & Megan), Natalie Walthart, Tracy (Chris Fielding) Frank of Lincoln, NE and Susan Frank of Ames; father and mother-in-law: Glynn and Dagmar Frank of Ames.

Although Kim loved flowers, the family requests no flowers as Kim would want her memory to make a difference. Memorials may be directed to Virginia Gay Hospital Foundation or Better Together Animal Rescue, Inc.

Kim's family would like to extend a special thank you to Drs. Elgin, Wood and Hassan for being the most wonderful medical care team that in no doubt prolonged her life.

Going to the link:https://www.ezeprod.com/podcasts/IdiotJam/audio/Track_07.mp3 you will hear one of the songs Kim and Todd sang together

Van Steenhuyse Funeral Home of Vinton is caring for Kim and her family. Condolences may be left at www.vsrfh.com.

Carol A Geater July 1, 2021, 1:14 pm I worked with Kim years ago at MCI. She was a dedicated, well-respected, fierce leader. My deepest condolences to her family, co-workers and many friends.
Michael Thoren July 2, 2021, 10:19 am So sorry for your loos.
Roseann Schwenker July 5, 2021, 3:17 pm Kim was a wonderful person and my sympathy goes out to Todd and their girls. Your family is in my thoughts and prayers.
advertiser content