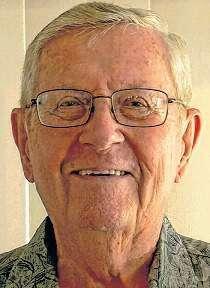 Laverne "Vern" Jackson, 87, of Marion, passed away on April 13, 2021, at St. Luke's UnityPoint Hospice in Cedar Rapids. A public visitation will be from 4 to 7 p.m. April 16 at the Cedar Memorial Park Funeral Home. A

Following the continued guidance from health officials, physical distancing must be practiced, which requires a limited number of people allowed into the visitation at one time. The use of face masks or shields is required.

Vern was born Dec. 15, 1933, in Memphis, Mo., to Leo and Veda Jackson. He graduated from Downing High School and entered the U.S. Army in 1954 and served two years. Vern married Jo Shubert in 1953. They were married for several years and had two sons, Ron and Terry, and one daughter, Karla. After they divorced, Vern married Mary Clark on Feb. 17, 1979.

Vern worked for the U.S. Postal Service as a letter Carrier for 34 years, before retiring in 1990. Vern held office in the Letter Carrier's Union; was a member of NARFE and a past member of the Lions Club. He also served several years as a Director on the board of First Federal Community Credit Union. Vern was a part time school bus driver for the Linn-Mar school district, and after retirement drove full time for a few years. He was a longtime member of First Presbyterian Church of Marion.

In 1993, Vern and Mary started traveling in their RV. They spent ten summers in Estes Park, Colo., doing a lot of hiking. While there Vern drove a tour bus in the National Park and Mary worked in the RV park office. In 1995, they started going to Arizona and spent 20 winters in Casa Grande. Vern loved the outdoors and when his children were growing up, he enjoyed fishing, hunting, boating and camping with his family. He was active as a scout leader and coached his daughter's school softball team, and always supported his children in their school activities.

He enjoyed working on the computer, reading, traveling, camping, fishing, card games, shuffleboard and spending time with family and friends. Vern especially loved his family and enjoyed seeing his children and grandchildren make a good life for themselves. He was a loving husband and he and Mary had 42 wonderful years together.

He is preceded in death by his parents; grandparents; daughter, Karla Wright; and a brother, Dean Jackson.

The family would like to thank UnityPoint Hospice for the love and care given to Vern throughout his illness.

In lieu of flowers, memorials may be directed to the American Cancer Society, UnityPoint Hospice or the First Presbyterian Church of Marion.

Online condolences may be directed to the family at www.cedarmemorial.com under obituaries.

Juanita Gardemann April 20, 2021, 3:27 pm My husband and i knew Laverne from way back in the 60's while he was still married to Jo. We always enjoyed being with them. I remember the boys when they were quite young. Sorry for the lose of your loved one.
advertiser content