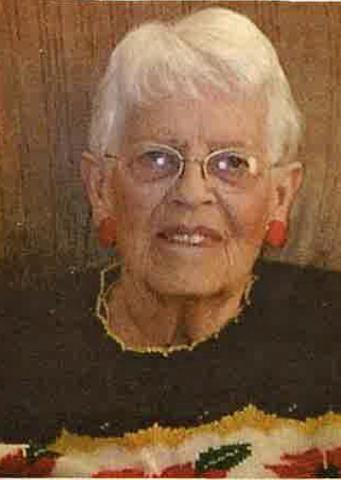 Dorothy was born Aug. 26, 1922, on a farm near Williamsburg, Iowa. She attended Pilot Grove rural school and later completed high school at Kirkwood Community College and received her B.A. degree from Coe College in 2003 at age 80, where she was a member of Mortar Board and the National Honor Society.

She was preceded in death by her husband of 47 years, Merritt Plagmann; her parents, Axel and Minnie (Klever) Fant; three brothers; and five sisters.

Dorothy was a faithful member of the Norway United Methodist Church. She was an avid quilter. Over the years, Dorothy made many crafts and generously crocheted over 6,000 baby caps for St. Luke's Hospital, where she volunteered for 18 years for St. Luke's Auxiliary and Volunteers. She also did volunteer work for Red Cross.

Dorothy was a member of the Benton County Farm Bureau, Jolly Dames and was an active 4-H leader, where she was made an honorary member. She contributed pieces to the Iowa SesquiCentennial quilt and a block for the Iowa Farmer Today quilt and made blocks for the St. Luke's Hospice quilts. She exhibited in state and local fairs. She was a member of the Eagles Auxiliary in Cedar Rapids and Thimble Twisters Sewing Club.

Dorothy was a member of the Kirkwood Alumni Board for four years and had been active in various school and local community activities. Dorothy lived on a "Century Farm" outside Norway, Iowa, since 1953. She and her husband spent 17 winters in Mesa, Ariz., until Merritt's death in 1989.

Visitation is from 4 to 7 p.m. Wednesday, April 14, at Norway United Methodist Church. Private service will take place at Norway United Methodist Church with livestream at 11 a.m. Thursday, April 15, through Hrabak-Neuhaus Funeral Service's Facebook page. Burial will take place at Marengo Cemetery, Marengo, Iowa. Memorials may be directed to the family.

Online condolences can be sent to the family at www.neuhausfuneralservice.com. Brosh Funeral Service of Norway is assisting the family.