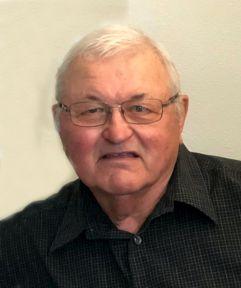 Funeral services will be held at 10:30 AM, Wednesday, April 7, 2021 at the St. Andrew's Lutheran Church Fellowship Hall in Van Horne, with Rev. David Lingard officiating. Interment will be held at Evergreen Cemetery in Vinton, with graveside military rites. Visitation will be held from 4:00 until 7:00 PM, Tuesday at the St. Andrew's Sanctuary and from 9:30 until service time on Wednesday in the fellowship hall. The wearing of masks and social distancing will be practiced at the visitation and funeral service. In lieu of flowers, a memorial fund has been established. Phillips Funeral Home in Vinton is in charge of arrangements.

George was born, December 16, 1946, to Ivan and Esther (Strellner) Reiss. He was baptized January 12, 1947 and confirmed March 26, 1961 at St. Andrew's Lutheran Church in Van Horne, where he was also a member of the Walther League. He grew up on the family farm and graduated from Van Horne High School with the class of 1965. He served his Country in the Army National Guard from 1965 through 1971. George worked as a farmer and was also employed with Rousch Production, Pillsbury, and later General Mills for over 20 years.

George married Carma Mortland on November 13, 1976 in Mt. Pleasant. He was a lifelong member of St. Andrew's Lutheran Church. George was an active member of the Thomas F. Bevins American Legion Post #148 in Van Horne, the Benton County American Legion and the 40 & 8. He was also a past member of Tara Hills Country Club. He loved stock car racing, Hawkeye sports and Cubs baseball. His greatest joy was spending time with his family.

He is survived by his wife Carma; daughters, Sarah (Corey) Finn of Perry, Heather (Shane) Mell of Vinton; 2 grandchildren, Braden and Parker Mell; and his brother John (Ardis) Reiss of Van Horne.

He was preceded in death by his parents; daughter Elizabeth; twin sons, Brandt and Brian; and his sister Leta Mae (Richard) Christy.

Larry Schadle April 5, 2021, 2:19 pm Very Sorry to hear that George has passed away.... May he Rest In Peace!
BRUCE GARDNER April 7, 2021, 5:17 pm Dearest Carmen, John and family. I was so sorry to see of the loss of George. A genuinely pleasant, good hearted, and wonderful person. It is too bad to see of your loss. Bruce
advertiser content