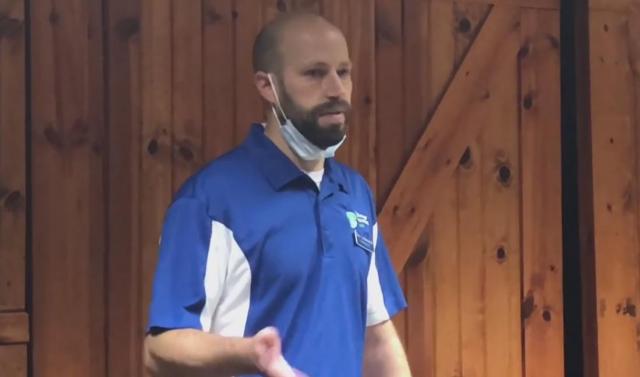 Dan LaGrange explains COVID-19 Vaccinations and how to receive one

At Tuesday's Noon Kiwanis Meeting, Dan LaGrange of LaGrange Pharmacy addressed the group giving them an update on distributions of the COVID-19 vaccines. He also took some times to answer questions from the group concerning the distribution and concerns.

He said that in the county the 5 pharmacies and several clinics, as well as public health, are distributing the vaccines. The county right now receives around 400 doses each week. He said that a quarter of the county has had at least one dose and as we've passed the 28 days out from the vaccines' arrival, approximately 3,000 have received their second doses.

Hy-Vee, CVS and Walgreen all receive their doses from the federal government so their doses do not come out of what the county gets from the state. At this time the county is getting the Moderna vaccine.

Some concerns have been raised about the speed with which the vaccine has been developed. LaGrange said that normally when a vaccine is developed there is a trial period time in which it is tested and data is reviewed and then they distribute the vaccine. With this vaccine, he said that because the government is paying for the cost of this, they are testing while distributing the vaccine so that the two overlaps, so it happened faster, but all of the steps are still being followed for developing a new vaccine.

"Another concern," he said, "is that the technology for the first two vaccines is a newer technology. It has to do with MRNA. As opposed to some of our older flu shot vaccines, they work in a little bit of a different way, so there is some concern over that." He went on to say, "Any time there is something new, we worry about what we don't know." He tells people to go with where they are right now, and to go with the information that they've got and to make that choice accordingly.

When asked when things would return to normal, he said that "herd immunity" which is when about 70-80% of the population has received the vaccine, is usually the number they look for. But he said right now they are just trying to vaccinate as many people as possible.

Someone asked if it will be like the flu shot where citizens are encouraged to get one every year. Right now that's an unknown. LaGrange said he hasn't heard a solid answer on that but that they are researching that. Right now we have to wait to see how long people retain their immunity to the virus.

When it comes to side effects, he said that there have been a few that have had some severe reactions and had to seek medical treatment a day or two later. He said the biggest concern is an allergic reaction as with any vaccine, so far he hasn't had anyone had that happen.

Medicare is reimbursing the pharmacies for anyone over 65 for their time and efforts to distribute the vaccines. Right now LaGrange has 2 dedicated employees giving the vaccines, and they have been administering about 40 each day. They also have done some off-site clinics in Urbana for those that can't travel to Vinton. Those under the age of 65 can still get the vaccine even if their insurance won't cover it, there is no fee.

The state requires that each county use up 80% of their vaccine before they can get more. With the coordination of Benton County Health and all of the providers, Benton County has been able to do that. So far the county hasn't had any of the Johnson and Johnson one dose vaccine. Eventually, LaGrange explained that the pharmacy will be able to order what they need, whenever they need it like they would with any other vaccine.

You can call the pharmacy to schedule a vaccine, and usually, LaGrange said it's 3 or 4 days out. They are following the guidelines that the state has put out. He said right now he has over 1,000 on the waiting list, the county has 1,500 waiting. LaGrange said to put yourself on multiple lists than call and remove yourself from the other lists after you have received your first dose. The location of your first dose will automatically schedule you 28 days out for your second shot. He said that there is a statewide database that keeps track of those who have been vaccinated with any vaccine so that they are able to see if you've been covered or not.