Auditor Speaks to local Kiwanis Club, Answers What is a naked ballot and more 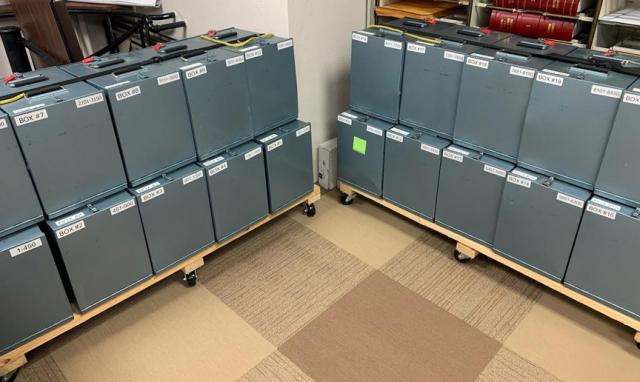 Boxes that used to carry ballots from the polling place are now used to store absentee ballots. 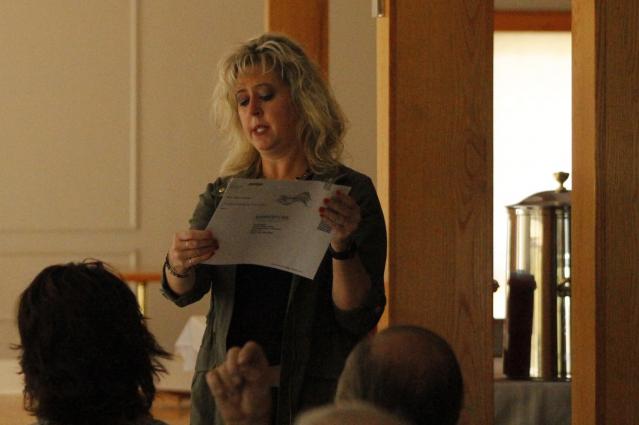 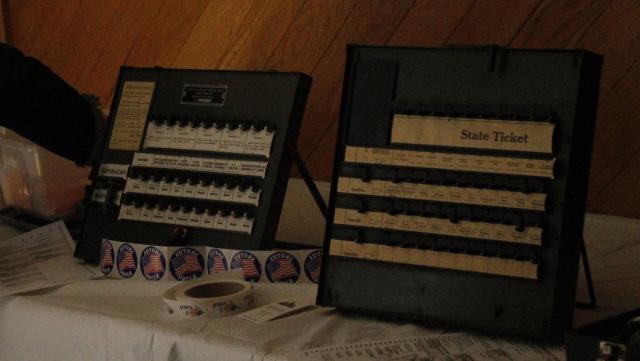 These antique voting machines brought back memories for some at the Kiwanis meeting.

With more than 20 questions sent to the Auditor by the local Kiwanis club the Benton County Auditor Hayley Rippel took time out of her day to answer and educate the listeners about voting. She talked about how ballots are handled, the cost to send and return them ($1.20 each way) and many other details.

Remember if you have an absentee ballot it MUST be postmarked on or before November 2nd.

The Auditor's Office may call you if...

...you tape your ballot envelope to keep it closed. Your phone might ring. The conversation might go something like, "This is____ from the Auditor's office. We received your ballot envelope in the mail. We see that it has been taped closed. We're just making sure that you were the one that did that." This helps them to verify that you indeed were the one that sealed the envelope and that your ballot has not been tampered with. They would then give you some options

...you didn't follow the instructions. There is a highlighted place to sign on the affidavit envelope, be sure to do that.

Did you request a ballot and then decide that you want to vote in person?

Bring your ballot with you to the Auditor's office or on election day and surrender it at the polling location that you vote in...DON'T leave it at home. The Auditor explained that she accounts for every ballot that is ordered and she doesn't have enough for everyone to get a duplicate. The one that is sent out, is now your official ballot. If you go to the polls, and you have requested a ballot already, the poll workers will have to call the Auditor's office to make sure it hasn't been returned. Maybe you lost the ballot or maybe it was lost in the mail. You will then sign an oath that says, "I lost my ballot, I will return it if I find it." Each ballot is accounted for.

Did you send in a ballot request?

If you did, that is also scanned into the computers to verify that a ballot has been requested. When requesting a ballot, fill out the information completely. The Auditor's office uses this information to make sure that it is really you requesting the ballot. If you've sent one request, that should result in a ballot, there is no need to send in more.

The Auditor's Office is required to mail out ballots within 24 hours of a received request. In one day alone, they had to process over 1,100 ballots. It took a monumental effort on behalf of the staff from other departments in the courthouse to get this accomplished in time.

So far the office has received 4,737 of the requested ballots back.

There are more than 17,000 registered voters in Benton County.

In 2016, the last presidential election there were only 4,400 absentee requests. She estimates that she might have 8,000 requests in before the election is over.

Can the voting machine be hacked?

No, the voting machines cannot be hacked. The machines are NOT connected to the internet at any point. This prohibits the possibility of them being hacked.

Handicapped accessible machines are also available for those that cannot see. Complete with headphones it walks the wearer through the steps for voting. These machines can also be used by anyone or as a backup machine in case ballots run out at the precinct.

This year the Auditor's across the state will be allowed to start counting the absentee ballots early. Because of COVID the requests for absentee ballots is much higher and the fear was that there wouldn't be time to get them all counted on election day.

After the machine tallies are completed, the write in candidates must be tallied. The write-in votes are tallied last. So when results are given there will be a delay in the final results.

However, the election results are still not considered "official" until the election has been canvassed by the County Supervisors which happens the following week. What does it mean to "canvas the votes"?  The write-ins sometimes might say, "Haley Rippel. Hailey Ripple. Hayley Ripel or H. Rippel" The Supervisors then have to decide if the voter meant the same person.

Is your ballot safe after it arrives? It is. As soon as your ballot arrives, it is logged in and then it will be sitting safely in a vault, yes, the auditor's office is a vault. Only election officials are allowed inside her office aka vault. The ballots are sorted into boxes in case they need to retreat an envelope prior to the election in case it needs to be located.

Who is listed first? Republican name or Democrat? The Secretary of State decided that this round, the choice used to be left up to the Commissioner of election.

What is a naked ballot?

A naked ballot is one that isn't dressed in its special privacy folder. in Pennsylvania if you mail it in naked, it's thrown out, but not in Iowa. It is encouraged to use that blue secrecy folder  for the voting privacy.

Every year there is confusion about where people need to vote. If you are unsure, click here. The locations haven't changed except for the ones noted below.

Because of the Derecho, the Atkins location will have to be changed.

Because of COVID, Eden - Harrison - Taylor which votes at the courthouse, may be located at a different location in the courthouse because of the masking rules for the courthouse. This is still up in the air, but just follow the signs when you get there to know which door you will need to use to enter. I'll try to remember to keep you updated!