Government : Entertainment and Education Really CAN Happen at the Same Time 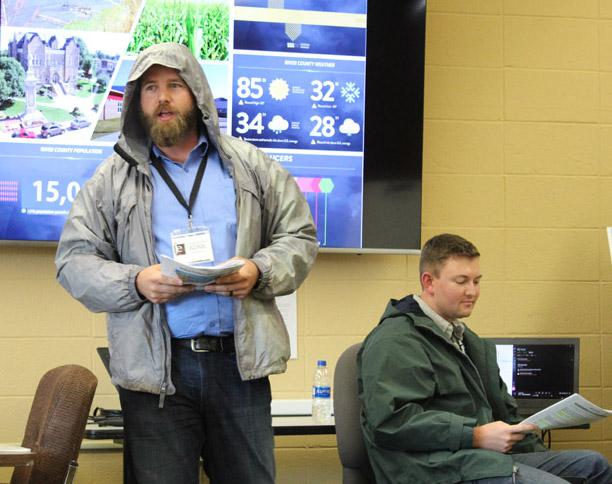 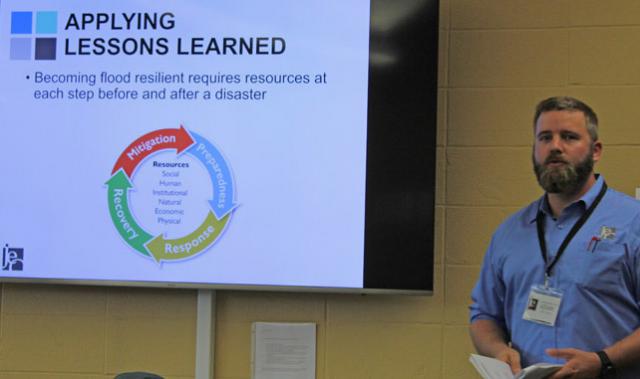 Normally when I am invited to a "government" type meeting I go and pay attention, but normally I don't leave thinking, "Now that was so fun!'

This week I attended a meeting led by the Iowa Watershed Approach and the Iowa Valley Resource Conservation and Development. Technically these aren't your typical government offices but are projects funded by the government via grants.

The group meets to learn about the effects of flooding and gives an opportunity for others to share their flooding experiences and advice with friends and neighbors.

Jessica Rilling had reached out to me a few weeks ago seeking information about Vinton's flooding and I passed her along to the people in town that knew the answers that she was seeking.

This week, I had a friend/neighbor say to me, "You might be interested in this meeting that they have. It's really been good." The friend had been flooded back in 2008 and for her and her husband, it was the first time it had ever happened to them even though they had lived in their home for 50 years.

So I thought, "Well, that's a new sort of meeting that I haven't covered, I'll go check it out." I dutifully added it to my calendar and planned to attend. The next day I had a note from Jessica "The "Flood Resiliency Tournament" is based on the "Extreme Event Game" originally developed by the National Academy of Sciences.

JEO Consulting out of Lincoln, Nebraska modified the Extreme Event Game to better match what rural communities experience during flood events. They have led the tournament in Western Iowa. This was their first time to Vinton, " said Jessica.

The night started off well, with some familiar faces, and some of course that I didn't know. All of them had one thing in common, they'd all been affected by flooding. All sharing the same, but different experiences.

The groups that hosted the meetings met at the Benton County Service Center and it lasted a couple of hours. It didn't seem that long though. The group brought along a game to play which provided various scenarios and solutions to flooding. Throughout the game, you were challenged to prepare, as well as finding the supplies your town needed to recover from a flood.

There were six teams that competed. First, the teams were divided up into categories. I was on the team that included a Fire Chief, Sheriff, Emergency Manager and I was in charge of the Electric Plant Manager. (Call me if you need some tips, Tom!) Each team was given a set of 24 cards but of those 24 just 12 could be used to help us solve a crisis. We had to decide which items were a priority and what we thought were unnecessary "solutions" to a flooding crisis. Following that, we were assigned to our town. using whichever cards that we thought we'd need of the 12 we proceeded to go to our towns and prepare for our "disaster." Our team was feeling pretty smug because we were the first to fill the slots on our board until a disaster hit that messed up our town preparation.

We did a lot of wheeling, dealing and bartering to see what neighboring towns could loan us to get us through our disaster. The funny part of the game is the way that it affects your thinking about disasters.

Just trying to figure out what I'd choose from the 24 choices that we were given helped to prioritize what's most important in a disaster. It also made me appreciate the people in charge and how in real life it is a give and take in a town's preparation.

For some, they realized that what they thought was important didn't really help in a disaster.

While the game played various catastrophes came along, complete with the game leader donning a raincoat as the weather alert sound filled the room. He read the latest bulletin to us and we scrambled to take care of the next crisis.

The group presented this for the first time to citizens where previously they had only shown it to people that actually do these jobs.

If you have a group that would like to have a bit of fun, or if you are teaching a class that might need an activity along these lines, direct questions to Jessica Rilling at 319-290-5537 or email her at jessica@ivrcd.org or you can also contact Adam Rupe at 402.322.0377 or email him at arupe@jeo.com

I highly recommend any civic group or classroom that could use an activity to give them a call, you will enjoy it!